HomeNewsSindhi - its Latin script - and the way forward! 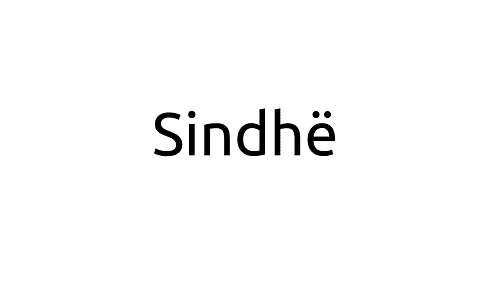 It has now become a common practice for people in South Asia to write their languages using English alphabets on the internet. Turns out, this doesn’t work well for Sindhis. With more than 50 alphabets and many sounds that are unique to it, it’s hard to write Sindhi only using the English alphabets.

So this guy, Fahad Maqsood Qazi, introduced a standard Latin script for Sindhi. He has explained the reasons that influenced him to create this script here. Whatever he says, shows us that the Sindhi language was in a need of a standard Latin script. But was it really? If Sindhi language really was in a need of a Latin script… then why no one else came up with this idea before him? Do others really feel the need he thought they do? Let’s find out!

Sindhi is not a bordered nation at all. They are scattered all over the world. They are present in Oman, Hong Kong, Singapore, USA, Indonesia, Canada, UK, Malaysia, UAE, India, and Pakistan in little-to-impressive numbers. (Source: Wikipedia: Sindhis). Sindhi language in Pakistan is taught in Perso-Arabic script, in India, many write it in Devanagri script, while in other countries Sindhi isn’t taught at all.

The question therefore arises, What will happen to Sindhis who are spread all over the world? Will they just slowly forget their language? Will they forget their history too? Probably yes. but is there any easy solution to that? Luckily, the answer here… is also yes!

Turkey abolished the Arabic script in 1928 and replaced it with the modified “Latin-script”. Somalia followed it a few years later, also replacing it with the “Latin Script”. Swahili, the most widely spread language in Africa, gave up the Arabic Script for the Latin Script. But why? to save their languages from being extinct and to make their languages globally acceptable.

While the Sindhi language is doing pretty well with the Arabic script in Pakistan, the same can not be said for Sindhi in India or the rest of the world. So why not just introduce a Latin script for Sindhi too? By doing this, every Sindhi, no matter where he belongs to, will be able to read in his language without any prior knowledge of the script.

Well.. this is exactly what Fahad has done.

But you’d be thinking that if this was truly necessary, then why no one else came up with this idea before him? Turns out, Sindhis came up with this idea long ago, but it was a time when the internet was not much popular. So the common people never got to know about it. They were just writers, poets, and educationalists debating over this and the Latin script was ignored and never adopted by anyone.

But now things are looking in the favor of Sindhis. Sindhis are tired of getting misunderstood on the internet. Just imagine for a moment that they use “J” to convey “ج، ڄ، ڃ (ज, ॼ, ञ)” (Three sounds by one alphabet!) and this is just one example. The Latin script will solve all of these problems and this gives us hope that it might get popular among those who use social media.

Moreover, Fahad says, he has made this script keeping programming and Machine Learning in mind. This means that in the next few years, those Sindhis who would step inside the field of Artificial Intelligence or NLP, they would prefer this script over Arabic or Devanagari. And because Programming, AI, and Computers are our future, he hopes that his script might get adopted officially by any institution or a country someday in the future.

For now, he is working on providing a way to language learners to learn Sindhi without giving them much of a headache. We all know that Arabic Script does not look appealing to language learners. You are provided with “K-t-b (ڪتب)” and you have to know that you have to pronounce it as “katab” not “kutub“. Latin Script alone would make Sindhi look appealing to language learners but he is further working on an online English-Sindhi dictionary which would make use of this script. and he is also working on a website that would contain short Sindhi stories written in the Latin Script with their translations in English. All of this is surely going to help them and we hope that as a result, Sindhi becomes the next popular language among the polyglots.

But for now, if you want to help in promoting this script, the best way to do this is to write in this script! Download a keyboard for Windows or Android from here now!

Where God Was Born?

Where God was born, a growing number of people find themselves trapped in the...
Entertainment

Amature is the misspelled form of the word amateur, which is a term used...
News