With tears in my eyes, I placed my hands on the lap of my senior. She is from Indian occupied Kashmir. I wanted to console her and share a feeling of friendship with her. But we both knew that It’s not easy to observe an ideology suffocate, you have grown up with, and have always looked up.

The constant valor of Kashmiris in the face of oppression, and sacrificing everything they had, has been nullified.

Article 370 of the Indian constitution that gave IOK, the special status of a separate state, state that India cannot directly control and Indians could not buy property there has been abolished after the recent amendment in the constitution.

AJK and IOK are disputed territories and will remain so until the conduction of referendum. So, neither Pakistan nor India has the right to implement their rule on Kashmir.

Removing this article is a direct attempt to burry Kashmiris’ right of self-determination, forever. More than seventy years of resilient struggle and freedom movement has been disgraced today. Martyrs of freedom movement and those stone-pelted-kids have dishonored.

Cutting all sorts of communication and services with house-arresting the mainstream Hurriyat leaders along with other politicians clearly, show the ruthless and tyrannizing Indian policies.

Now it’s up to Pakistan, to highlight this issue on international forums. Only then we can save the Kashmiri ethnicity from one of the worst genocides of the history of mankind.

UN has to play its role in getting the referendum done that it has promised the people of Kashmir for decades.

War can be the solution!

Behind this oppression is the gateway to the downfall of India. Hindustan is failing badly as a democracy, and it cannot shut everyone’s mouth, especially of those who have don’t fear death.
This regime of oppression can push the whole world into a chaotic situation. War can be its solution! 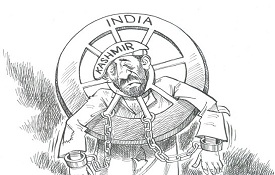 4 men protecting the boundary on the on side yet he seems to find...
News

You were looking for a synonym, as a result, you landed onto this page....
Science & Tech

No doubt, today a large group of people think that someday they would fly...
HardHourTech Blog