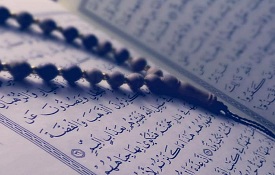 In the name of Allah, the beneficent, the merciful.

I am writing my first article on this blog. In this article, I will discuss the first few ayahs of the Holy Quran w.r.t revelation.

If you are a Muslim or have limited knowledge of Quran, it will not surprise you that in the very first verse of the first revelation, Allah (SWT) orders Muhammad (PBUH) to Read or Recite by repeating what is He Almighty revealing him through angel Gabriel.

But it will surprise you to know to know that the very same scenario has revealed by Allah (SWT) earlier in the Holy Bible.

I will raise up for them a prophet like you from among their brothers. And I will put my words in his mouth, and he shall speak to them all that I command him.

What does it mean by “I will put my words in the mouth of the Prophet? and he will speak according to my command?”

History tells us It was the 27th Night of Ramadan, Muhammad (PBUH) was forty years of age and was in a cave named “The Cave of Hira” which is three miles away from the Makkah (Mecca).

In the cave, an angel appears and commands him in his mother tongue to Read or Recite. Muhammad (Peace Be Upon Him) was scared, as it was an unusual event and replied: ” I Am Not Learned.”

Jibraeel (Gabriel) commands him the second time, and Prophet (PBUH) replies the same. The third time Jibraeel continues by saying the verse below.

Read! In the Name of your Lord, Who has created (all that exists).
Has created man from a clot (a piece of thick coagulated blood).
Read! And your Lord is the Most Generous.
Who has taught (the writing) by the pen .Has taught man that which he knew not.

This first complete revelation of Holy Quran proves that verse of the Holy bible prophesied no other prophet than Prophet Muhammad (Peace Be Upon Him). A prophet who didn’t use his own words. There are several other verses in the bible which mentions Muhammad ( Peace Be Upon Him).

And when they give the book to one who cannot read, saying, “Read this,” he says, “I cannot read.”

As I said that there are many verses which I can quote here, but since we have to stick to the topic, I will not quote them now. I am quoting the last verse from the Quran, which will leave no doubt in the mind of readers.

Nor does he speak of (his own) desire.
It is not but a revelation revealed,
He has been taught (this Quran) by one mighty in power Jibrael (Gabriel).

There are several malls in Islamabad that are constructed following international standards. Shopping malls...
News

How To Gain Weight? Healthy Approach for Positive Life Style.

How to gain weight and track your performance over time? In this post you...
HardHourTech Blog